How to Dehydrate Pears

Pear season just ended and I want to preserve pears for eating in the winter. Dehydrating pears is an easy and safe way to preserve pears. Dehydration is basically drying food, which is one of the oldest methods of preserving food for later use. Dried foods are ideal because they do not require refrigeration, they are lightweight, and take up a small amount of space.


Because of the high humidity in the part of Texas where I live, I do not dry the pears outdoors; instead I dry my pears indoors using a modern food dehydrator that I got at a local second-hand store. To prepare the pears for the dehydrator, I first wash and peel the pears.  Afterwards I cut the pear in half, remove the core of the pear, and then slice the pear into wedges.


Pears have a tendency to turn brown like many other fruit such as apple when they are cut. To prevent this, I use a pretreatment so that the pears do not darken as much as untreated pears. There are many ways to pretreat pears. I use ascorbic acid, vitamin C, mixed with water as a safe way to prevent the pear from browning. Ascorbic acid can be found in powder form in many drugstores or grocery stores where they sell canning and preserving items. Pears do not have to be pretreated. I try to keep my preservation of food as simple as possible. The pretreatment is basically for cosmetic purposes, but be aware that untreated fruit may continue to brown after dehydration. 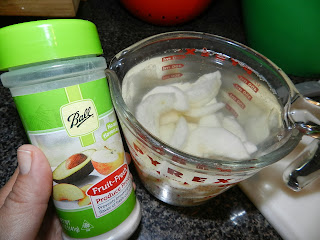 To make a pretreatment of ascorbic acid, I mix 1 teaspoon of the powder ascorbic acid into 2 cups of water. I then place the sliced pears into this mixture for 5 minutes. I only use this mixture twice before I have to make up a fresh batch of pretreatment. I then remove the pears and allow them to drain off the excess water. 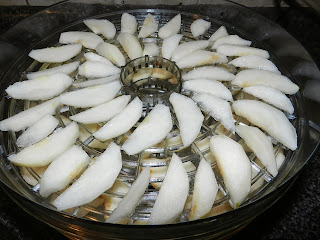 After dehydrating the pears allow them to rest for 30 to 60 minutes before packaging to avoid moisture build up inside of the closed container. I store my dehydrated pears in sterilized, dry canning jars with a tight-fitting lid.  I then place the container in a cool, dry, dark area (my pantry). I check the dried pears often in the pantry to make sure that the pears are still dry and that no moisture is seen on the inside of the canning jar. If I do see moisture I will need to use the pears immediately or redry them. If I ever see mold I know to discard the food immediately. 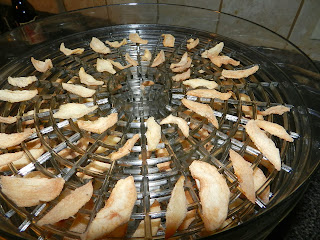 I use the dried pears in the winter as a snack and I also add them to cereal, oatmeal, muffins or salad.