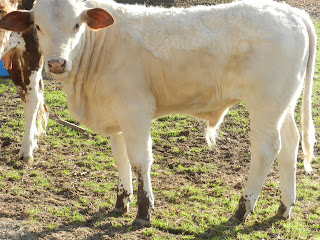 Doc Williams saved my son! No, Doc Williams is not a physician he is a veterinarian. Usually if any of our farm animals need medical care it is my husband and son who will do it. We were going to wait for my son to return home from college in West Point, New York for spring break to get caught up on some animal husbandry, but Doc Williams veterinarian prices were very reasonable that we decided to round up the cows and take them in for a visit. 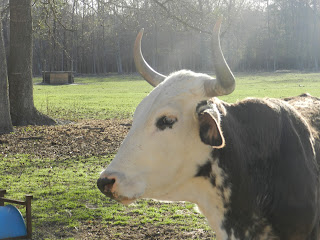 We have two cows which were in need of some animal husbandry. One female cow needed her horns removed. She is being too bossy with her horns among the other cows and last week she accidently poked my husband with her horns. So for the sake of safety we needed to have her dehorned. My husband and son have previously dehorned two other cows. Granted her horns would be the largest they have ever dehorned. We also have another male calf that we will be slaughtering in December for beef which needs to be castrated. We castrate our slaughter cows for several reasons: 1) The beef taste better. I can tell by the taste if the animal has been castrated or not. Most farmers who eat their own beef prefer the taste of castrated males. 2) The cow will gain more weight because he will spend his days grazing instead of trying to bother the females or fighting with the bull.  My husband and son have probably castrated more than 15 pigs and cows over the years.

To work on the cows the vet had to restrain them. He tried to take off the cows horns with some large looking bolt cutters but the horns were too big. Instead he used a wire with handles on each end and basically sawed through the horns. To castrate the calf you can either put a band around the testicle which cuts off blood flow and the testicle then dries up and falls off or you can make an incision and remove the testicle. The vet did the later scenario.
While the cows were at the vet we decided to go ahead and worm them, give them some penicillin to fight off any infection that their vet wounds may cause and get them caught up on their vaccinations. My husband usually gives them their vaccinations but we thought that after their vet ordeal they may not let us corral them for awhile. I have listed the vet bill below so that you could have an idea of the cost that goes into raising your own beef.
Dehorn cow $7.50
Injection/s.c. $1.00
Penicillin  L. A. $10.00
Fly Dope $2.00
Ivomec Injection $8.00
Calf Castration $10.00
Injection/s.c. $1.00
Penicillin  L. A. $5.00
Fly Dope $2.00
Ivomec Injection $4.80
8-Way Blackleg Vaccination $3.00
Total=$54.30
At this point the cows are doing well after their visit to the vet. They are back with the other cows and are eating well. We will keep an eye on them for a while to make sure there are no signs of infection and that they are healthy.
Labels: cost of raising farm animals cows