It is the beginning of a new year so that means that I need to analyze my last year’s farm animal expenditures. I look at how much I paid in feeding the animals, how much I paid in keeping the animals healthy and how much I received in return for my efforts. I do this in order to see what aspect of farming is profitable and to look at which areas I need to cut back on or enhance. I thought it would be beneficial to share this information to kind of give an idea how much one could spend in raising animals for family use.
I do not own this farm necessarily to make a monetary profit or as a way to earn a living. Instead I have this farm to feed my family but I still do have to analyze it yearly to see if what I am doing on this farm is viable. Farming on any scale is by no means  a “get rich quick scheme”. Farming takes planning, time, effort, sweat, tears….But, do not let those words discourage you. If I could not live on a farm and do these farming activities I would miss this lifestyle so much. Being a farmer takes a lot but it gives me so much more than I could ever explain.
I have three categories of farm animals to inspect this year; cows, pigs and chickens. I felt like this past year was an unusual year because I paid more money out in feeding my animals.  The reason for that is Texas was under extreme drought. I have never seen a worse drought in this area. I had to supplement my animal feed with store bought feed because pasture grasses did very poorly and my garden did extremely awful. I depend on those two areas to produce feed for my animals.
The first category is cows. I usually have anywhere between four to eight cows depending on the time of the year. I spent $1,556.50 in animal feed and keeping the animals healthy. I earned $1,465.87 when I sold three cows at the auction barn. That leaves me with a negative of $90.63. I do not have any beef as profit for this past year even though I slaughtered a cow because I count the beef as profit in the year I cut and package the beef. The cow I slaughtered a few days ago will count toward this year’s profit versus last year because I will cut and package it in a couple of more weeks. The second category is pigs. This year I had four pigs. I spent $466.46 in animal feed and keeping the animals healthy.  For this effort I received 398 pounds of packaged pork. This means I spent $1.17 per pound to provide my family with pork chops, bacon, pork roast, ham, sausage….Which I estimate that at $3 a pound, I received $1,194 of pork. When I subtract what I spent to raise the pigs, I saved a total of $728. 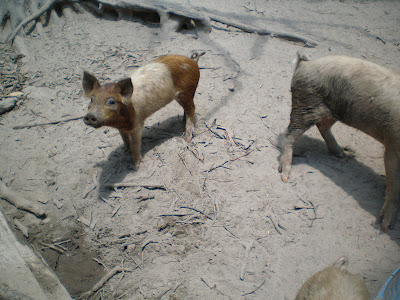 The last category is chickens. I average about eight to ten chickens throughout the year. I spent $71.27 in animal feed and keeping the animals healthy. I received a total of 740 eggs or 61 ½ dozen eggs. This means I spent $1.15 per dozen of eggs produced. Eggs are about $1.70 a dozen where I live which means I only saved about $33.28. I believe overall despite the added feed cost related to the drought it was a viable year. I do have some ideas on how to improve my meat production but, what cannot be priced into my farm animal expenditures is the value of eating wholesome and healthy animals that are grown without any harmful growth hormones or chemicals. Nothing beats full flavored, chemical free, fresh meat and eggs.
Labels: cost of raising farm animals